GOD IS A SHELTER FROM THE STORM

Have you ever been caught out in a storm? You know how scary that can be. The winds are howling and as if that is not disturbing enough, they are lifting and flinging heavy stuff about. The rain is pouring down and if it doesn't relent, some flooding could result. The clouds are dark resulting in low visibility, you really can't find your way home with the occasional lightning. It's dangerous to be walking or driving in such weather. The smart thing to do is find some shelter to ride out the storm.

Eventually, the winds will die down, the rain will dry up and if it's daytime, the sun might even smile again. But in the meantime, you will be safer, more secure in a shelter.

As it is with physical storms, so it is with any other kind. A storm does not last forever but it can be merciless while it lasts. It can do untold damage, it can destroy what we treasure so much and cause losses that take years to restore, if ever. While some of this cannot be avoided, especially when it's a freak storm, we can minimise our losses when we seek shelter.

God is that shelter you need when the storms of life assail. When everything around is scary, when circumstances and the odds are stacked against you, He is the Rock you can run to and be safe. David knew this so well because his life was in peril for much of his young adulthood. He had been anointed king but the guy in office, Saul, was bent on killing him to ensure his own son, Jonathan, succeeded him. And David hid in God, spiritually, that is. All Saul's efforts to kill him came to nothing and eventually, David became the king of Israel as God had decreed.

Here are some of David's proclamations during this harrowing time recorded in the Psalms:

David acknowledged in the verse above that the storms were passing by. No need to get swept away by them.

"From the end of the earth I will cry to You, When my heart is overwhelmed; Lead me to the rock that is higher than I. For You have been a shelter for me, A strong tower from the enemy. I will abide in Your tabernacle forever; I will trust in the shelter of Your wings." - Psalm 61:2-4 (NKJV)

In this one, he admits that his heart can get "overwhelmed". When there are relentless assaults, we may need to find a hiding place, a shelter, a strong tower. And that is God.

"My soul, wait thou only upon God; for my expectation is from him. He only is my rock and my salvation: he is my defence; I shall not be moved. In God is my salvation and my glory: the rock of my strength, and my refuge, is in God. Trust in him at all times; ye people, pour out your heart before him: God is a refuge for us." - Psalm 62:5-8

In the passage above, David not only testifies that God has been his defence, he counsels himself and others to put their confidence in Him. 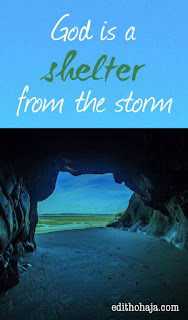 Other scriptures to remind you of the protection we His children have in the Lord:

"O Lord, thou art my God; I will exalt thee, I will praise thy name; for thou hast done wonderful things; thy counsels of old are faithfulness and truth. For thou hast been a strength to the poor, a strength to the needy in his distress, a refuge from the storm, a shadow from the heat, when the blast of the terrible ones is as a storm against the wall." - Isaiah 25:1-4

Remember, the storm will only last a while but it can be deadly while it rages. Don't be reckless. Take shelter in the Lord and He will keep you safe.

Amen in Jesus' name.
+++++++
The scriptures used in this post are from the King James Version of the Holy Bible except where otherwise stated.
+++++++

You may also like these encouraging posts about God's protection and care: