KEEP PRAYING (God is hearing you)

There are times when we ask ourselves the point in praying any more when we haven't seen the results from our previous petitions. It can be discouraging when we have believed God for many years for the salvation of loved ones, healing or provision, etc. and nothing seems to be happening.

Our situations may not be pleasing but we shouldn't doubt the faithfulness of God because of them. God sometimes takes time to respond to our petitions and even when He does, the answer may not be exactly what we asked for. But we can be assured that whatever He does for us is the very best whether it seems so or not.

Besides, that we are not aware of the answer does not mean that God has not done anything. I once read of a woman who was praying for her wayward daughter and worrying that God wasn't responding, not knowing that the Spirit of God had convicted her daughter where she was drinking in a bar in a distant city and she was in the process of turning her life around.

Do you know that some people go home to be with the Lord before the answer to their prayers manifest? Abraham and the other patriarchs, for example, were gone for centuries before their descendants took possession of Canaan, their land of promise.

"These all died in faith, not having received the promises, but having seen them afar off, and were persuaded of them, and embraced them, and confessed that they were strangers and pilgrims on the earth." - Hebrews 11:13

God knows when and how best to deliver the answer to our petitions. Remember David's anguished cries to God because of Saul's pursuit to kill him?

David prayed for the destruction of His enemies, and who was a greater enemy than King Saul who was hunting him down with an army? Yet whenever Saul fell into David's hands, he spared him. (I Samuel chapters 24 & 26) And when eventually Saul died in battle, David mourned him profusely as shown in the verses below taken from 2 Samuel, chapter 1.

"19. The beauty of Israel is slain upon thy high places: how are the mighty fallen!
21. Ye mountains of Gilboa, let there be no dew, neither let there be rain, upon you, nor fields of offerings: for there the shield of the mighty is vilely cast away, the shield of Saul, as though he had not been anointed with oil.
22. From the blood of the slain, from the fat of the mighty, the bow of Jonathan turned not back, and the sword of Saul returned not empty.
23. Saul and Jonathan were lovely and pleasant in their lives, and in their death they were not divided: they were swifter than eagles, they were stronger than lions.
24. Ye daughters of Israel, weep over Saul, who clothed you in scarlet, with other delights, who put on ornaments of gold upon your apparel.
27. How are the mighty fallen, and the weapons of war perished!"

That is the kind of heart David had. He really didn't want Saul to be destroyed, he just wanted to be safe. I'm tempted to think that God delayed judgment on Saul because of David's love and respect for him. Sounds weird, doesn't it? But these are the kind of complicated calls God makes when he answers prayer. He takes into account what our mouths are saying and the often discordant tunes from our hearts. Eventually, He does what will be for the ultimate good of everyone involved.

So do not give up, child of God! Maintain your right standing with God and keep praying. God is surely hearing you and in His due season, the answer will manifest. 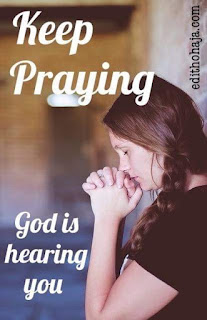 +++++++
The scriptures used in this post are from the King James Version of the Holy Bible except where otherwise stated.
+++++++

🌺
(Those I'm calling children of God are those who have accepted Jesus as their Saviour and Lord.

"But as many as received him, to them gave he power to become the sons of God, even to them that believe on his name" - John 1:12

Ask Him into your heart today and become a partaker of the assurances in this post and in the Bible. God bless you richly as you do that in Jesus' name.
🌺