YOU ARE SAFE IN THE LORD! Do not live in fear

The world we're living in is a dangerous place: conflicts, accidents, natural disasters, violent crimes, you name it, abound. It seems that wherever we turn, there's something to make us afraid and potentially hurt us.

When we listen to the news, this feeling is magnified because calamities and misfortunes get reported much more than heartwarming events. We call it the journalism of exception in mass communication. The bad, or as one scholar called it, "the odd, eccentric and bizarre", which may likely be unusual, makes it faster into the news than the good, (most likely) commonplace stuff.

Contemporary events, especially as reported in the news, create a climate of fear.

If you dwell on these things so much, you will be trapped in fear day in, day out. While you shouldn't neglect to be careful to avoid danger where possible, don't allow the perception that evil prevails cripple your life.

Fill your heart with the word of God and look out for the good in the world. Believe me, it's out there and you will see it. Do your share of good as much as you can too.

Know that irrespective of the evil in the world, God is still in control. You can make Him your shelter and have peace of mind. That is not the same as living in a bubble. We as believers know that nothing can be petfect this side of heaven. But we also know that if ever we encounter anything untoward, God will be with us and help us through it. None of these things that people fear should break us. Rather, they should make us stronger because of the grace of God.

Irrespective of the evil in the world, God is still in control and He is our banner. 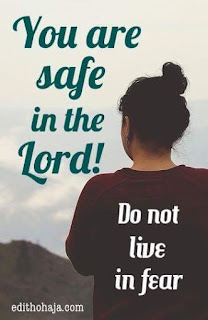 We know that the troubles in the world come directly or indirectly from the sin of humanity. I want to briefly share a Bible story in this regard. In Genesis, chapter 20, Abraham claimed that Sarah, his wife, was his sister because he thought he would be harmed by other men who would desire her.

"And Abraham said, Because I thought, Surely the fear of God is not in this place; and they will slay me for my wife's sake." - Genesis 20:11

Well, someone did take Abraham's wife, the king of the land no less, but God scared the living daylights out of him and he returned Sarah with apology and costly reparation. You can read the entire story and know that the God, who defended Abraham and his wife in Gerar (and it wasn't the first time, He'd done it in Egypt too - see Genesis 12: 10-20), the same God is your Father and He is watching over you.

Take the words of God to heart:

"He that dwelleth in the secret place of the most High shall abide under the shadow of the Almighty. I will say of the Lord, He is my refuge and my fortress: my God; in him will I trust. Surely he shall deliver thee from the snare of the fowler, and from the noisome pestilence. He shall cover thee with his feathers, and under his wings shalt thou trust: his truth shall be thy shield and buckler. Thou shalt not be afraid for the terror by night; nor for the arrow that flieth by day; Nor for the pestilence  that walketh in darkness; nor for the destruction that wasteth at noonday." - Psalm 91:1-7

Keep fear at bay because you are safe in the omnipotent and omniscient God.

Read that entire psalm and others like it. Many of them were written by a man whose life was in peril for a long time: King David. Generally, the Bible is full of such encouraging words. Do not live in fear, my dear, because you are safe in the Lord. Amen in Jesus' name. 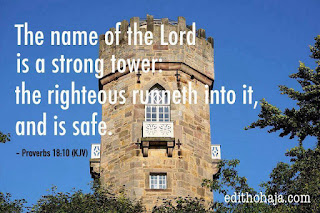 http://edithohaja.com/live-in-hope-poem/
Posted by Aunty Edith at 13:18